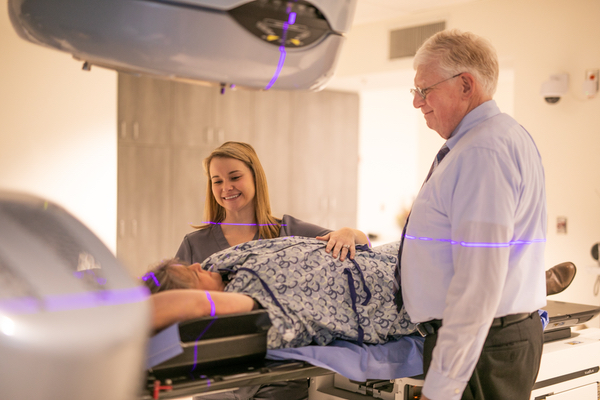 Will I Need Chemo or Radiation Therapy for Breast Cancer Treatment?

If you’ve received a breast cancer diagnosis, you’re no doubt concerned about what treatment will be like. The right plan for you will depend on the type of breast cancer as well as its stage, size, location, and your personal preferences. The plan may include chemotherapy, radiation therapy, or both. It can also include other types of treatments such as surgery to remove the cancer, hormone therapy, targeted therapy or immunotherapy.

Two of the most commonly used treatments, other than surgery, are radiation therapy and chemotherapy. Let’s take a look at what they are and who is most likely to have these treatments included in their plan.

Radiation therapy is a painless and effective way to target and kill breast cancer cells with high-energy X-rays, protons, or other particles of radiation.

Radiation therapy can be given externally or internally. External radiation is the most commonly used method for breast cancer patients. The patient is positioned carefully under a machine called a linear accelerator that delivers very carefully targeted beams of radiation to the area where cancer is (or was) located.

Internal radiation, also called accelerated partial breast irradiation (APBI), can be administered after surgery to reduce the risk of breast cancer recurrence. After a breast-conserving lumpectomy, a device containing radioactive seeds is inserted in the area where the cancer was removed. This procedure may be done during tumor-removal surgery or as a separate procedure after surgery. The seeds will deliver radiation directly to the surgery site for a few days after which the device is removed. This is used most often for early-stage breast cancer treatment that doesn’t also require chemotherapy.

Mastectomy is the surgical removal of the complete breast. Radiation is less common after a complete breast removal surgery since the entire breast and sometimes surrounding chest wall tissue is removed. While this type of surgery is not recommended for everyone, it does reduce the likelihood that radiation is needed after the surgery.

If the tumor has grown in such a way that it can’t be removed surgically, or if the cancer has spread to other areas of the body such as the liver or brain, radiation therapy can carefully target these areas to shrink the tumors and provide relief from pain these tumors can cause.

Chemotherapy uses drugs to kill cancer cells. There are several types of chemotherapy for breast cancer. Your oncologist will make a recommendation for which type is most likely to work best. Not every breast cancer patient needs chemotherapy, especially when it’s found at an early stage.

Chemotherapy is usually injected into a vein, but in some cases can be given in an oral form. It’s given in cycles which consists of several sessions over the course of a few weeks. The specific timeline depends on the drugs being used and the patient’s reaction to them. Each cycle is followed by a recovery period to provide a break from the drugs’ side effects.

If a large tumor was identified, chemotherapy may be used before breast cancer surgery to shrink the tumor, making it easier to remove. Potentially, this means more of your breast tissue is retained.

In some cases, chemotherapy is used before and after surgery. The cancer care specialists will determine if this is necessary.

Chemotherapy can be the primary treatment for patients whose cancer has spread (metastasized) outside the breast and underarm areas. It can be given when first diagnosed or after other types of treatment are given.

Coping with Side Effects of Breast Cancer Treatment

Chemotherapy and radiation therapy can cause side effects which usually go away after treatment ends. Talk to your oncology team about what to expect. If you are likely to lose hair from the chemotherapy that is used, you can make plans for a wig or other head covering.

While radiation therapy side effects are usually less intense than chemo side effects you may still notice fatigue, breast swelling, and skin irritation or peeling similar to a bad sunburn. Radiation can also increase the risk of lymphedema, a buildup of lymph fluid in the arm where lymph nodes were removed. If you notice arm swelling, talk to your oncologist about what you can do to get the fluid to drain.

Because treatments are usually given five days a week for several weeks, it’s important to have a radiation oncologist who is convenient for you and your caregivers who will provide rides to appointments.

If you’re in the Atlanta area, radiation therapy for breast cancer using the latest technologies is available at our clinics in Blairsville, Conyers, Covington, Decatur, Lawrenceville, and Snellville, Georgia. Request an appointment online at a location near you. We’re also available to give you a second opinion on the radiation therapy treatment plan that has been recommended for you.