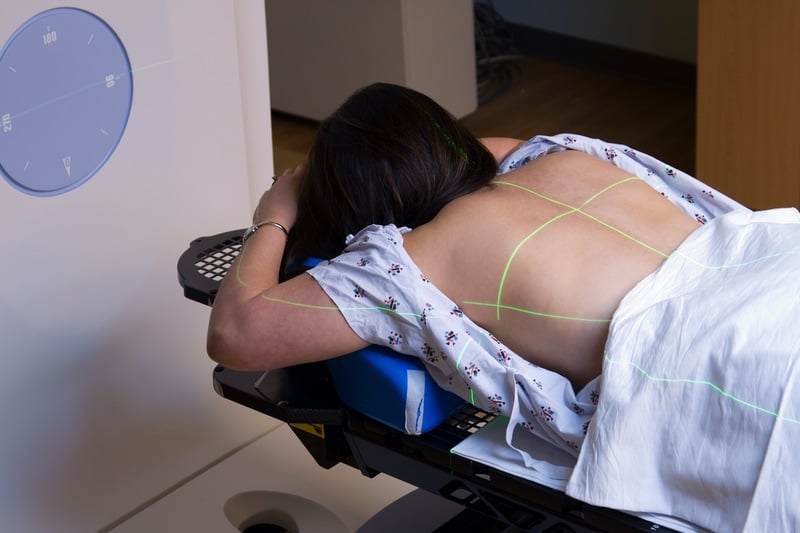 When is Radiation Therapy Used for Lung Cancer?

Oncologists treat lung cancer with several different methods, one of which is radiation therapy.

Radiation therapy uses high-energy beams to kill cancer cells. It can be used alone or in combination with surgery, chemotherapy, and/or targeted therapy. How it’s used depends on the type of lung cancer being treated, location and size of the tumor, and the stage of cancer at diagnosis. While not everyone with lung cancer receives radiation therapy as part of the treatment process, it can be used in a few different ways.

Before starting any treatments the oncology team, including the medical oncologist, radiation oncologist and surgeon, will discuss the best recommendation for treatment based on several factors. Depending on your specific situation, radiation therapy can be given in a few different ways.

Before Surgery to Remove Lung Cancer

If the tumor is rather large, shrinking it with radiation reduces the amount of tissue that needs to be removed during surgery.

As a Primary Treatment Method

Quite often, radiation therapy is used in combination with chemotherapy as one of the primary treatment methods. This is especially the case when the tumor is hard to reach with surgery, or if surgery isn’t an option for the patient.

After Surgery to Remove Lung Cancer

In some cases, the oncologists will recommend radiation therapy after surgery to be sure all of the cancer cells in the area have been killed.

To Treat Lung Cancer in Distant Areas of the Body

If lung cancer has spread to other areas of the body such as the brain or the bones, these areas will be treated as lung cancer using radiation therapy to shrink the lesions in these areas. In these cases, radiation may be used to treat pain caused by cancer or other issues such as bleeding or difficulty swallowing.

If radiation therapy is recommended as part of the treatment process, the oncologists have determined that the potential side effects are outweighed by the benefit it can provide.

Side effects of radiation therapy may be noticeable during treatment, and in some cases, after treatments are complete. Talk to the radiation oncologist and the technicians about how you’re feeling. They can help you address most side effects such as:

Before you meet with your radiation oncologist for your first appointment, you’ll need to have a few critical pieces of information available.

Sometimes your medical oncologist will suggest you go to a radiation oncologist they know. It’s important to do your own research about the radiation oncologist, the technologies available at the practice, and the convenience of the location. You’re going to have an appointment approximately 5 days a week for 4-6 weeks for radiation therapy. Make sure it’s easy to get there, park and get into the building.

If you or someone you love has received a lung cancer diagnosis in the Greater Atlanta area, we hope you’ll consider one of our radiation centers located in Decatur, Snellville, Covington, Conyers, Lawrenceville and Blairsville. Our experienced radiation oncologists care for lung cancer patients every day and can provide you with a radiation treatment plan for your consideration. Contact us for an appointment. Your health and your future are at stake! We’re happy to provide second opinions as well.