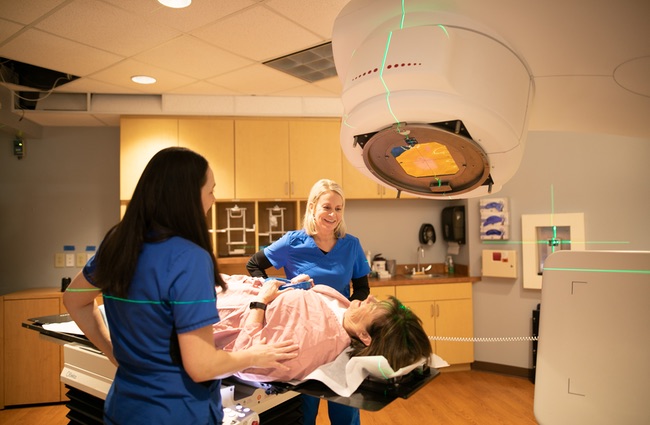 What to Expect with Breast Cancer External Radiation Therapy

How is Radiation Therapy Used?

Radiation therapy kills or slows down the growth of cancer cells. For breast cancer patients it’s used to be sure that any left over breast cancer cells that could be left after surgery are killed in the breast and in nearby lymph nodes.

Radiation therapy for breast cancer is most commonly external beam radiation. Internal radiation called breast high-dose rate brachytherapy can be an option for patients whose breast cancer was found at a very early stage and meet specific criteria.

This type of radiation therapy uses a linear accelerator to send radiation beams to the affected part of the breast. The radiation is delivered at various angles to be sure it’s reaching the area where the cancer was located in the breast.

Internal radiation is also called brachytherapy. For breast cancer it’s called high-dose rate (HDR) brachytherapy. Used most often for women whose cancer was found at a very early stage, this method uses small tubes or catheters with radioactive pellets placed inside the breast near the affected breast tissues.

Your radiation oncologist will talk with you about what is right for your specific situation.

When Do Oncologists Recommend Radiation Therapy?

Breast-conserving surgery or lumpectomy is the removal of the breast cancer tumor rather than the entire breast. Oncologists recommend lumpectomy when cancer has not spread to the other parts. Lumpectomy is followed by radiation therapy to destroy the remaining cancer cells.

During a mastectomy, oncologists may not be able to remove all the cancer cells from the breast tissues. Radiation therapy is used after surgery to ensure no cancer cells are left behind. The energy beams are focused towards the area. And in some cases, the nearby lymph nodes are also included.

Radiation therapy after mastectomy is preferred under the following circumstances:

Radiotherapy can also be used to relieve side-effects when cancer has reached other parts of the body.

What Happens During Radiation Therapy?

Before the external beam radiation treatment, your radiation oncologist conducts a physical examination. A planning or non-diagnostic CT scan follows the exam. The scan images will help the oncologist to locate the precise areas where radiation therapy will need to be targeted. Your body may be marked with a permanent marker or a tattoo. These marks will ensure that beams are pointing to the correct location during each treatment. Additionally, a simulation treatment will be conducted where there is no actual treatment administered. You will lay on the table and the oncologist will be sure that everything is precisely aligned as directed by your treatment plan.

How Long Does Radiation Therapy Take?

Each session of radiotherapy lasts about 15 minutes or less once you’ve been placed in the exact position you need to be in. For many patients, radiation therapy is started a few weeks after breast cancer removal surgery. Generally, radiation therapy is recommended five days a week for 4 to 8 weeks, based on how your body responds.

What Are the Side-Effects of Radiation Therapy?

Can You Control the Side-Effects of Radiation Therapy?

Some of them are:

If you or someone you know has been recently diagnosed with breast cancer, our team is here to help. To learn more about radiation therapy for breast cancer and the benefit of an individualized cancer treatment plan, give us a call today to schedule an appointment at one of our eight locations in Georgia. Our locations are conveniently located throughout the Atlanta metro area including Decatur, Conyers, Covington, Lawrenceville, Snellville, and Blairsville.