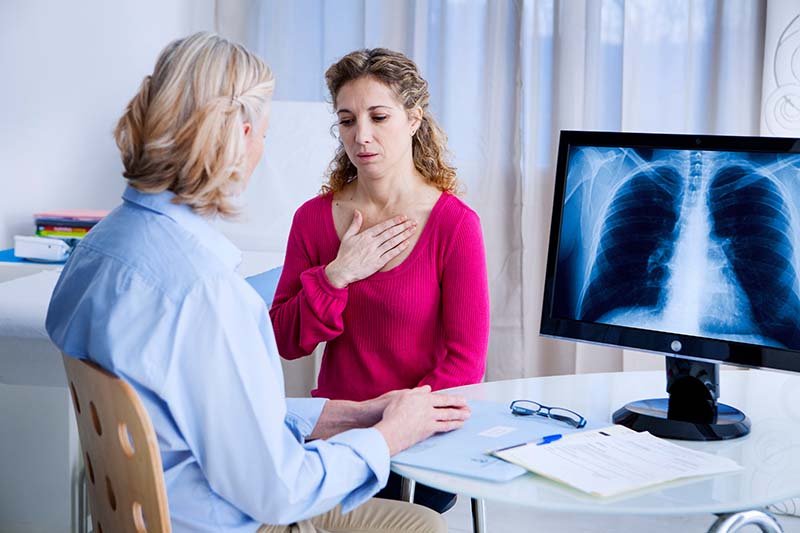 Lung Cancer in Women: What You Need to Know

For decades, lung cancer rates have always been higher in men than in women mostly related to more men smoking than women. But in recent years the lung cancer rates in women have actually surpassed that of men. And not just among women who have a history of smoking, but among non-smokers too. This has resulted in a lot of focus on what’s causing this rise of cases among women and how their treatment needs may be different from men.

Although smoking is a major risk factor for both men and women, it seems that women’s bodies may react differently to the cancer-causing chemicals found in cigarettes. This has resulted in more lung cancer cases, especially among women ages 35-49. But it’s more than smoking. There’s been a rise in lung cancer cases among non-smoking women too.

These non-smoking women may be exposed to more second-hand smoke and environmental toxins. But there could also be a hormonal response and/or genetic factors that affect women differently than men. At this time, there are only theories with no definite answer as to why more women (namely non-smoking women) are being diagnosed with lung cancer.

The chemicals left in the air from cigarette smoke are inhaled by others living in the same area. Over time this can build up and cause lung cancer in someone who doesn’t smoke. In addition to lung cancer, second-hand smoke is related to heart attacks and strokes in adult women.

This toxin is naturally found in Georgia’s granite bedrocks and can exist in a home without showing any signs. This odorless, tasteless, and colorless gas causes more than 800 deaths per year in Georgia and is the second leading cause of cancer in the United States. Because it is undetectable without a proper test, it is recommended that all homeowners in Georgia get their homes tested for radon gas. Learn more about radon testing in Georgia here.

Some chemicals are known to cause lung cancer. If you work or live in an area where there are fumes or dust from uranium, arsenic, cadmium, chromium, nickel, asbestos and some petroleum products, you’re at a higher risk of having genetic mutations that can lead to lung cancer.

Lung cancer symptoms tend not to vary much between men and women, and in its early stages, most patients don’t show any symptoms at all. Some of the most commonly seen symptoms of lung cancer in women include cough, shortness of breath, chest pain, and fatigue. Additionally, patients may experience any of the following as their cancer develops:

It’s a good idea to get screened for lung cancer if you have a history of smoking or you currently smoke.

Is One Type of Cancer More Common in Women Than Another?

Women are more commonly diagnosed with adenocarcinoma than the other types of non-small cell lung cancers.

How Do Lung Cancer Treatments Vary By Gender?

Lung cancer treatments aren’t as gender specific as they are specific to a genetic mutation that may be identified through bio-marker testing. Some genetic mutations seem to be more common in women: