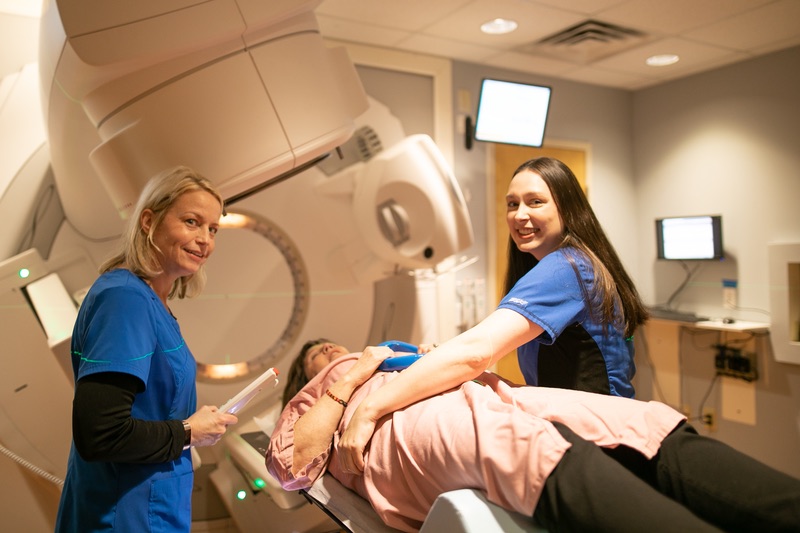 How is Radiation Therapy Used for Gynecologic Cancers?

Radiation therapy is often used as a part of the treatment process for gynecologic cancers such as uterine cancer (also called endometrial cancer), cervical cancer, ovarian cancer and others. The timing is a bit different for each patient, but it’s usually used in combination with surgery and other treatments like chemotherapy or immunotherapy. Let's discuss the main types of radiation therapy used for gynecologic cancers and how they work with other treatments for the best possible outcomes.

External radiation can be delivered via a machine called a linear accelerator. The beam of radiation or carefully delivered to the area where the cancer is, or was, located to kill any remaining cancer cells. There is a lot of planning before treatments start to be sure that the right amount of radiation is given at exactly the right angle during every session. This helps prevent damage to other organs and tissue that’s located nearby. These treatments are typically given 5 days a week for 4-8 weeks.

Many times a mold will be created that helps the patient stay in the exact spot needed to treat only the cancer and not affect the areas nearby. By reducing the impact on areas such as the rectum and bladder, side effects can be minimized.

For gynecologic cancer patients receiving external beam radiation therapy, it may be given in combination with chemotherapy.

Internal radiation, which is sometimes called brachytherapy, is used for some gynecologic cancers. Small radioactive pellets are placed inside a tube that is then placed inside the body for a short period of time. During the time the seeds are in place, radiation is delivered to the area where the cancer is located.

It can be considered low-dose or high-dose brachytherapy. With high-dose, the applicator is left in place for 10-20 minutes at a time with a few treatments given over the course of a few days. Low-dose brachytherapy for gynecologic cancers typically requires the applicator to stay inside the patient for a few days while they remain immobile. Because of this, low-dose is less commonly used.

Brachytherapy is less commonly used for ovarian cancer but is often the preferred type of radiation therapy for other gynecologic cancers such as cervical, endometrial, vaginal, and vulvar cancers.

When is Radiation Therapy Used in the Treatment Process?

There are a few ways radiation therapy may be used for gynecologic cancers depending on the stage and whether cancer cells have grown in other areas of the body.

Side Effects of Radiation Therapy in Female Cancers

The side effects of radiation therapy depend on a few factors including:

Some of the most common side effects for women with gynecologic cancer include:

Most of these side effects will go away after treatment is complete. Be open with the cancer care team about how you’re feeling. They often have tips or medications they can give on what works to help reduce side effects.

Radiation Therapy for Gynecologic Cancers in the Atlanta Area

For those in the Atlanta area, which includes Blairsville, Conyers, Covington, Decatur, Lawrenceville, and Snellville, we are here to help patients with a gynecologic cancer diagnosis. Request an appointment at one of our convenient locations for a consultation with our experienced radiation oncologists. We can discuss the right treatment plan for you while making sure it’s conveniently located near your home.